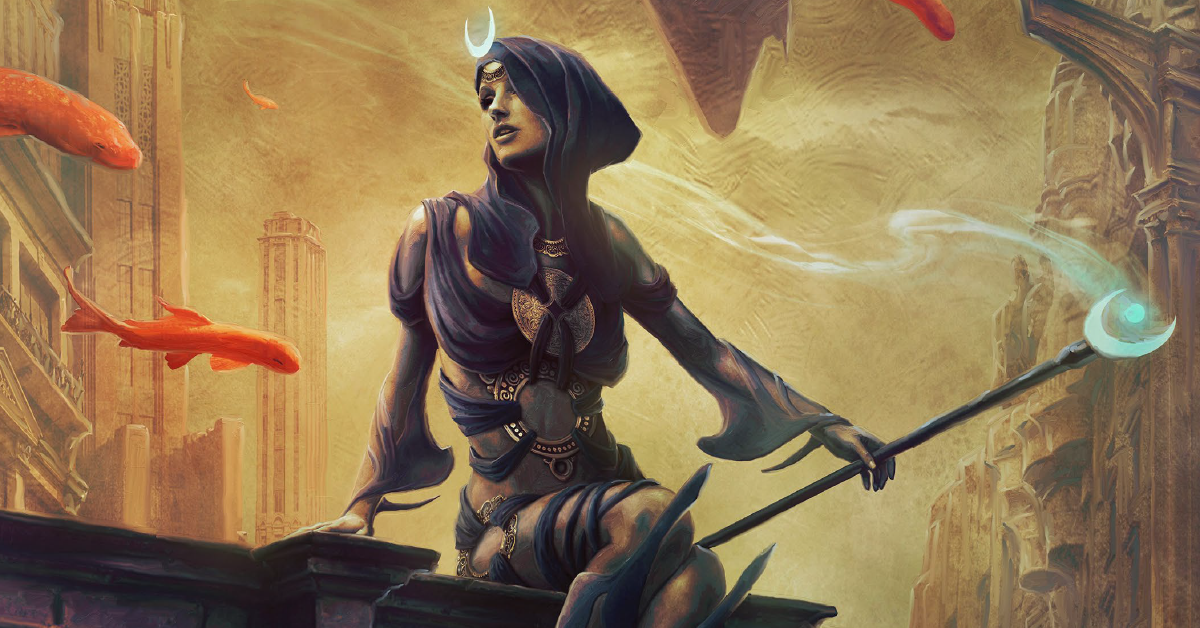 Between its gloriously bizarre setting and its player-driven storytelling, there’s something truly magical about Monte Cook Games’ Invisible Sun. If you’re running a campaign in the Actuality, or thinking about dipping your toes in, here are five tips to make your group’s narrative even more magical and memorable.

1. Give Your Players Problems Without Solutions

I like to do this regardless of the system I’m running, but Invisible Sun feels like it was made for this. When planning for a session, focus on designing challenges without preconceiving their solutions. Invisible Sun has a massive focus on player agency and creativity. Be sure you give the players room to experiment.

Let’s say your players broke into a Vance’s home to steal a book containing a map to a Legacy cache. One of the challenges you’ve come up with is an enchanted lock on the chest containing the book they’re after. In a less insane RPG system, you might rule that only the right key can open the lock, so that means the players will need to track it down (often into a crypt or a dungeon). In Invisible Sun, maybe there is no key. That isn’t going to stop the players from getting in; between wicked keys, weaving, all those deliciously situational spells, and your players’ cumulative pool of ephemera, there’s a good chance they can just open the lock as soon as they find it (or at least transform it into a tree of some sort).

Of course, that’s problematic if you were relying on the key-dungeon to carry the session; what was a major hurdle in a less open-ended campaign just became a minor one, solvable by a single incantation. Thankfully, you have a ton of options at your disposal, all of which involve making the problem more complicated, rather than making the solution more complicated. Get creative! Get weird!

Maybe the lock is attuned to violently reject anybody whose isn’t of an Empathic heart—and it just so happens that none of your players are empaths! How will they solve that? They’ll have to get creative themselves. Maybe they track down an empathic NPC and convince them to join the crew for the heist. Or maybe they deduce that a Vancian spell must have been used to lock the chest, and thus the Vance of your party might be able to learn the unlocking spell by pilfering and studying your mark’s (possibly sentient) notebooks. Be open-minded. These freeform solutions make great stories that your players will talk about away from the table.

And remember—this is Invisible Sun! If you end up creating a problem that’s too devious, and none of the players’ solutions are convincing enough, that’s fine! Let them fail. Give them some of that sweet, sweet Despair and up the stakes as everything goes pear-shaped.

2. Get Them Invested in the Sooth Deck

The sooth deck is the centerpiece of your table. It determines the flows of magic along the Path of Suns, and has mechanical implications for every task your vislae attempt. But don’t treat it as a purely mechanical addition to the game, because that’s selling its potential short.

As much as possible, you want to make the sooth deck seem mysterious and powerful. I recommend spending some time with The Gate and mastering all the cards and their divinatory meanings. Use the game narrative section every now and then to give extra weight and character to the cards. If you train the players to care not just about which Suns are enhanced or diminished but about the actual card, your immersion at the table can go through the roof. There’s something awesome about pulling Unknowable Truth when your players are chasing a minor mystery and hearing an audible gasp as the answer slips away from them. The Path of Suns is the literal heart of your table, so make it feel like it.

There’s some non-thematic pay-off to this as well. Let’s be honest: keeping track of the Path of Suns is hard, especially once you put a card on the Testament of Suns. That bookkeeping takes up a lot of mental space (“Let’s see, we’ve got the Nemesis of Secrets on the Testament, so that’s minus two to the venture, but then we have the Companion, which copies the previous card, so we have minus three, but Red Magic is enhanced so it’s only minus two…”). Get your players invested in the sooth deck, and you can outsource the bookkeeping; the players will be able to keep track of all that themselves, because they’ll actually be invested in each turn of the cards. That means you’ll be free for planning more surreal twists and turns. For example, you could…

One of the brilliant thing about Invisible Sun is that it contains the real world in the form of the Grey Sun. Your vislae all used to dwell in Shadow, completely ignorant of the true scope and meaning of the Actuality. They eventually awaken to their true identity, and so they’re able to return to Indigo and Satyrine. It should go without saying that they were not alone in this awakening.

By GM fiat, you can import any real world personality or historical figure or even fictional character into Invisible Sun, without bending the rules of the universe. All you need to do is decide that _______ was actually a vislae all along. Then they can show up to take part in your adventures, stir up trouble, or just exist in the background!

One of the fun things to do with this is to import the character, but then invert their personality to create immediate and surreal juxtaposition (which is really what Invisible Sun is all about). So maybe in your universe, Genghis Khan is a vislae, but is actually a mild-mannered Maker who’s always looking to lend a helping hand. Or maybe Amelia Earhart is a tyrannical Goetic who rejoices in murder and carnage.

You do want to be careful with this tip, of course. It’s a spice, not a main course, and your mileage with this one will vary depending on your group. A natural evolution of this idea is that you can…

4. Build Your Own Multiverse

Are you running Invisible Sun with a group you’ve played other campaigns with before? If so, you have the opportunity to throw a bit of meta flavor at them.

Remember how the Actuality contains the real world, which is a false reality? Well, who’s to say that the real world is the only false reality it contains? So why not have the players visit a half-world of Shadow containing one of your previous campaign settings? Revisiting a memorable location in a new context makes for a fun session—especially if you lean into the idea that Shadow is hilariously unconvincing to awoken vislae.

You could also bring in the players’ favorite heroes or villains from other games for a session or two. Make it a full multiverse-spanning campaign if you want to! You can even reveal to the players that the last campaign’s heroes are Modalities of their vislae!

Again, this is one to be careful of; you probably don’t want to whip this out in all of its (potential) glory if your group is very dedicated to staying soberly serious. But even then, you can use this as an effective garnish. You can get a lot of mileage even if you never actually visit the old setting or reintroduce major characters; maybe your players come across a book of stories, one of which describes the events of a previous campaign. Just the allusion can be enough to inject a little flavor into the Actuality that is uniquely your group’s.

5. Commit to the Weird (But Not Too Weird)

Invisible Sun has some really cool stuff in its toolkit, and the rules do a great job of reflecting the nature of the setting and giving you all the tools you need to embrace its surreal aesthetic.

But here’s the thing. Invisible Sun is weird as all hell. Mirrors are viruses. The future is the past. Monday is literally just a dude. But it’s all internally consistent and logical. It’s not weird just for the sake of being weird, so you shouldn’t be either. So when you dive deep into the bizarre, try not to violate that internal consistency—instead, draw upon it for ideas.

Read all the books in the Black Cube, especially The Path. Then, get creative. Get inspired by the setting’s inherent strangeness, and occasionally try throwing something wild at the players to remind them what makes Invisible Sun unique.

You could have a location be completely cut off from the path of suns (especially unnerving if you’ve gotten them invested in the sooth deck!). Or, maybe you force players to trade character sheets for a scene as their minds are twisted by an opposing vislae’s curse. Make a challenge where high ventures are actually harmful. Let a Goetic’s summoning go wildly out of control and bring forth something completely alien and strange. Have a player’s spell suddenly become sentient and rebel against them during a pivotal scene.

Invisible Sun is pure, unadulterated magic. With a little creativity, your campaign can be magic too.

Category: GMing
About the Author