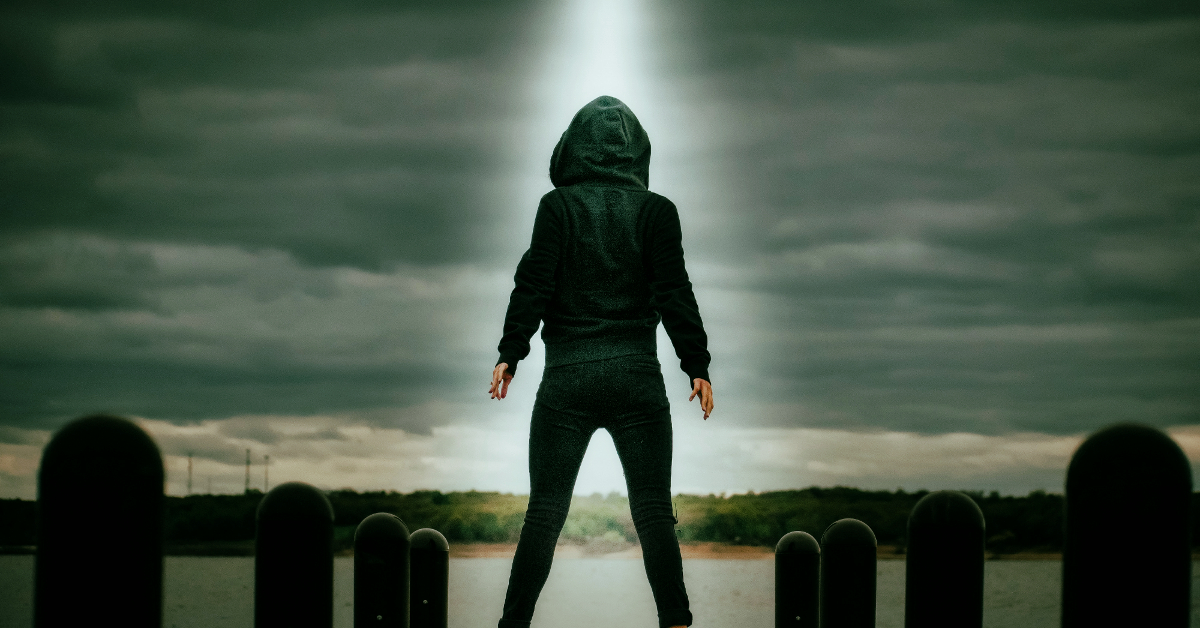 It’s embarrassing to admit now, but one of my first great fears in life was alien abduction. One of my earliest clear memories, in fact, is walking into the living room while my dad was watching a Discovery Channel documentary on the subject. I must’ve been around six or seven, which probably explains why the sight of a re-enacted gray shoving a needle into an abductee’s neck left me screaming. And so began my second greatest phobia (right behind spiders).

Growing up at my dad’s house didn’t make that any easier. It was built back in the 20s, and had an expansive yard in the back and high walls along the sides to keep out the prying eyes of the neighbors. And, if you happened to live in a corner room like I did, your windows looked out into pure blackness once the sun went down. If I woke up in the middle of the night and had to go to the bathroom, I’d do so only with the greatest trepidation, taking cautious steps and peering into all the shadows as I moved, half expecting a group of grays to descend on me. Hell, even the kitchen, which got a sliver of light from the streetlamp out front, was all the more sinister for the orange glow highlighting the jamb of the window, like the rim of a portal ready to devour you.

As I grew older, I never really outgrew this fear, although I did live in homes that were less panic-inducing. My lifelong interest in the paranormal, which was probably incidental, did eventually lead me to deeper studies of the alien abduction phenomenon. Which means it wasn’t all that long before I learned about sleep paralysis. If you’ve never experienced sleep paralysis, it’s a weird liminal state between sleeping and waking where your body is still locked into sleep mode and unable to move, but images and figments from your dreams are able to bleed into your perception of the real world. It’s pointed to as the leading explanation for abduction phenomena, and is also believed to be the origin of legends about succubi and incubi.

I was living in Japan the first, and only, time I experienced sleep paralysis myself. I awoke in the dark of the night, lying in my futon. I immediately realized I was experiencing sleep paralysis when my body refused to move. Fear overcame me. I could feel a presence in the room, like somebody was standing at the foot of my futon. But the weird thing is, there was nothing there. I’ve heard other people talk about their own sleep paralysis demons: gray aliens, robed figures, the infamous hat man, literal demons, even the girl from The Exorcist (as Micah Hanks tells it). But I had nothing. It was just the vague, uneasy feeling of something standing there, staring down at me.

It would be a few more years before I realized that aphantasia was a thing, and that I had it. But once I did, a lot of things started to click in my head (I think people call it their “Sixth Sense” moments). It suddenly made sense why lucid dreams never really let me alter them, because I lacked the capacity to visualize as other people do. And it held that there was no alien to come snatch me away for the same reason: the lack of a mind’s eye made me immune to alien abduction.

When I tell people this, they tend to laugh, assuming I’m being sarcastic (which, frankly, wouldn’t be too off-brand). But I’m actually being deadly serious. After a lifetime of living with the vague terror of alien abduction, the idea that I’ve been immune to the phenomenon all this time is weirdly liberating. It’s like the best kind of plot twist, a “the power was in you all along” moment. I don’t see dead people, and it is invigorating!

Which, at the risk of going off the deep end, leads me to speculate on what role our own minds play in the paranormal in general. Most skeptics would say “it’s all in your mind”; hardcore believers would say “none of it’s in your mind”. But especially as you dig into the weirder topics in Forteana (like time-travelling bigfoot level weird) it becomes harder to believe that anything in the paranormal is really external to our own minds. That doesn’t make it any less real, only stranger.

So, what else does aphantasia separate me from? Do people with aphantasia see ghosts? Can they become the victim of gang-stalking? I’d love to talk to an aphant who’s seen bigfoot and get their take. Because as crazy as it sounds, I wonder if part of the paranormal (if we assume there’s an actual mechanical explanation for some of these events) depends on our ability to perceive it in specific ways. If that’s true, then what does aphantasia mean for our understanding of the unexplained?

And yes, I realize that’s an awfully grandiose hypothesis to put out after a single incident of sleep paralysis. After all, it could have just been a fluke. But until my own experience or somebody else’s account casts doubt on this conclusion, I’m happy to declare myself unabductable by extraterrestrials and their damned surgical needles. Take that, Discovery Channel!

Categories: Aphantasia, Paranormal
About the Author